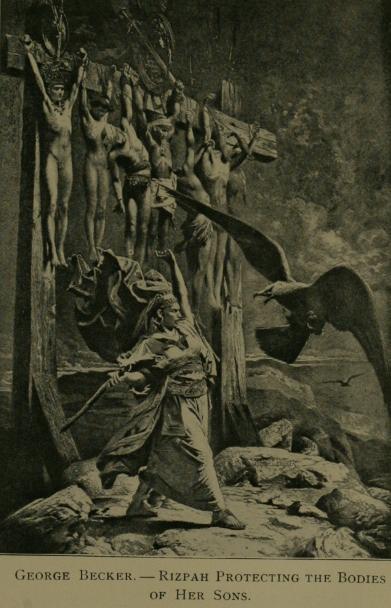 My devotional led me to a scripture I’ve never read, and I can’t seem to let it go. In second Samuel, we hear the story of Rizpah.  She was a concubine of Saul, and by no fault of her own, had her two sons taken from her in repayment for Saul’s bloody deeds. Along with the five sons of Merah, they died, and the scripture says that:

“Rizpah then set out a sackcloth and set it out for herself on a rock. From the beginning of the harvest till the rain poured down from the heavens on the bodies, she did not let the birds touch them by day or the wild animals by night. “ 2Samuel 21:10

According to a commentary I read, that’s five months she stayed there. Can you imagine the horror she witnessed, not to mention the physical suffering? How many times she wanted to hide her eyes or run from that place? How strong she had to be in the face not only of wild animals but in witnessing what was happening to the bodies of her beloved children? She was a warrior, and I had never heard her name before today.

The scripture says that when David (finally) heard what she had done, he gathered the bones of Saul and his son Jonathan, along with all seven boys, and buried them. The end.

This story haunts me. We hear the sad resolution of the boys who lost their lives through no fault of their own, but we never hear about what happened to their mother. How much of herself she left out there on that rock, what she said to David when he finally came, how she carried on after that. And where was Merah all this time, anyway?

Maybe Merah was grateful for Rizpah’s sacrifice, or maybe she thought the whole situation would be better left alone. Maybe she thought Rizpah had lost her mind. Merah lost five sons, so she certainly mourned, and everyone does that differently to be sure, but there is something in the fierce protection of Rizpah that stirs me today. It reminds me: motherhood doesn’t end with death.

I think of how much my mother endured, the ways I caused her suffering, and how she stood by me nevertheless. God knows she wasn’t perfect, but she was steadfast. I think of the mothers I know who sacrifice everything for their children, who hold pain in their hearts, who keep going, day after day. Motherhood costs us, and it feeds us. It makes us stronger and more fragile all at once. Rizpah’s name means ‘coal’ or ‘fire’, and that is an apt description of what the love of a child will do to a mother’s heart. It burns us, and makes us glow. It purifies us and makes us strong. Like Rizpah, we stand long after everyone else goes home, our hearts beating outside our chests, guarding and defending our children in word, body, and prayer.  Sometimes our actions make little sense to the world and even to us.  And like Rizpah, our stories remain for the most part, untold.

© my little epiphanies 2017 all rights reserved

One thought on “Rizpah”

This site uses Akismet to reduce spam. Learn how your comment data is processed.